The Athens International Airport Eleftherios Venizelos (ATH) is typically the first point of entry into Greece if you’re traveling to the Greek islands via a port in Athens. Even if you’re flying to an island instead of taking the ferry, you will likely have a layover at ATH with a connecting flight. Ground transportation between the airport and a port is easy once you learn some helpful tips.

The airport is located…

If you’re going on a ferry or cruise, be sure to double check which of the 3 ports in Athens you are departing from.

The metro is a convenient option for your Athens airport transfer. Particularly if you are spending a night in Athens before departing for the islands.

To get from the airport to the city, take the Metro’s blue line (line 3) from the station at the airport. Once you depart the baggage claim area of the airport, walk out any exit and look for signs that take you to the Metro station. You get to it via a covered walking bridge that crosses over parking lots. Once you’re in the station, purchase a ticket at the ticket window. There are special tickets for an Athens airport transfer. Be sure to purchase a ticket and keep it with you for the entire ride. There are Metro personnel that stop passengers at random and you can get a fine of more than 40 euros, which you have to pay on the spot, if you don’t have a ticket.

The cost of a one-way ticket is approximately 10 euros – prices are subject to change. Trains run every 30 minutes, 7 days a week from 6:30 a.m. to 11:30 p.m. Travel time from the airport to Syntagma station (Athens center) is about 40 minutes.

If your final destination is the port of Piraeus, stay on the blue line (line 3) one stop after Syntagma and get off at Monastiraki. At the Monastiraki Metro station, take the green line (line 1) to Piraeus. You don’t have to purchase a new ticket, your ticket from the airport is good all the way to Piraeus at that time.

The metro does not go to the Port of Rafina or Port of Lavrio.

The airport express bus is the most inexpensive Athens airport transfer to the center of the city and to the Port of Piraeus. To get from the airport to your destination, take the bus that has a route closest to where you are going. You may have to take another form of transportation from the bus stop if your destination isn’t right on the route.

Once you depart the baggage area of the airport, walk out any exit and go to the far right hand end of the terminal. The bus stop and ticket booth is located between exit 4 and 5. Purchase your ticket at the ticket booth for the route you need. Then wait for the bus that has your route number (e.g., X95) on it.

The airport express bus has 4 routes:

X95 : Syntagma (City Center) – Airport
This route ends at Syntagma Square in Athens city center. Once at Syntagma Square, you can transfer to the Metro, tram, or grab a taxi to your final destination. Travel time is about 1 hour, dependent on traffic.

Χ96 : Airport – Port of Piraeus
This route ends at Piraeus, which is Athens port for ferries and cruise ships. Once at Piraeus, you can walk to your destination (or terminal) or take a taxi. You can also transfer to the suburban rail station, Metro, or tram. Travel time is about 1.5 hours, dependent on traffic.

Χ93 : Kifissos KTEL (long-distance buses) Airport – Station
This route ends at the intercity bus (KTEL) terminals Kifissos and Liosion. In Kifissos, you can transfer to the suburban rail station. Travel time is about 1 hour, dependent on traffic.

The cost of a one-way ticket is 6 euros as of 2019 – prices are subject to change. Buses run every 20-30 minutes. Click here for a summer and winter time table. You can also use Google maps to help determine when the bus is arriving.

3. Bus to the Port of Rafina

In the summer (peak season) there are frequent buses running between the Athens’ airport and the Port of Rafina.

The bus departs the airport from the bus stop between exit 2 and 3 of the arrivals hall, opposite Hotel Sofitel. It departs about once an hour and is available from 06:00-21:45. Be sure to double check the time tables or use Google maps to determine departure times.

The cost of a one-way ticket is 4 euros (children under 6 years old travel free) as of 2019 – prices are subject to change. You can buy tickets from the bus driver when you get in the bus.

This is a convenient Athens airport transfer and is the most expensive option, besides a private car. Taxis in Athens are yellow and you can hire one via the Uber app or you can find one at exit 3 of the arrivals level. A taxi is the best option to get to the Port of Lavrio, because there are no direct buses or metro.

Prices are subject to change. We highly recommend researching current taxi prices before your trip so that you’re not overcharged.

Holidays and infrequent strikes are known to put a wrench in Athens ground transportation and ferry schedules. To be informed, check the following Athens news source prior to your trip: Ekathimerini.com. Ekathimerini typically lists any interference with transportation and you can alter your plans accordingly. And be sure to read our tips for taking ferries to the Greek islands. 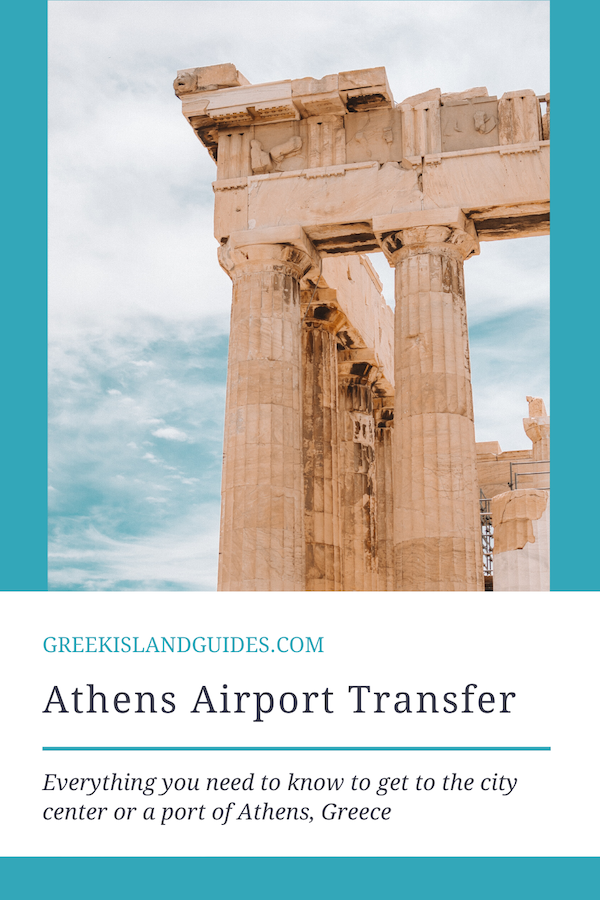